Hong Kong quartet in confident mood ahead of Open 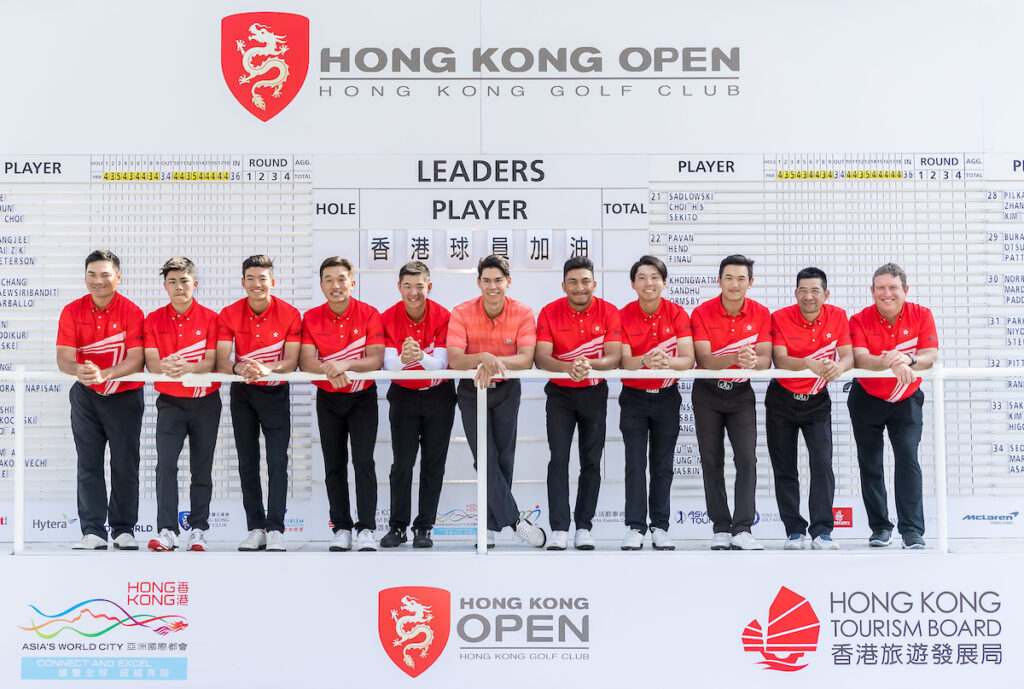 Four players flying the flag for Hong Kong at this week’s Hong Kong Open were in relaxed but confident mood on the eve of their national tournament which tees off at Fanling on Thursday.

Under bright blue skies at Hong Kong Golf Club, Ben Wong, Leon D’Souza, Alexander Yang and Taichi Kho met with media and spoke about their goals for the week ahead.

Leon D’Souza, currently studying at the University of Southern California, returns home to compete in the Open for the second time:

“I played well last time – I made the cut in my first event. I was nervous but drawing on that, it’s a lot different now. It was two years ago, and I’ve played a lot of big golf events since then so that was really a building block for me, mentally, as well as what I can work on in my game.

Taichi Kho is also studying in the U.S. and returns to play in the Open for the second time:

“I’m very excited. There’s always a lot of excitement around the Open but at the end of the day it’s just another tournament. I’m preparing to win, just like every other week – I’m here to play.

“Last time I played I felt quite overwhelmed but this year I feel more able to focus on my own process and be a bit more aggressive on the golf course and just play my own game.” 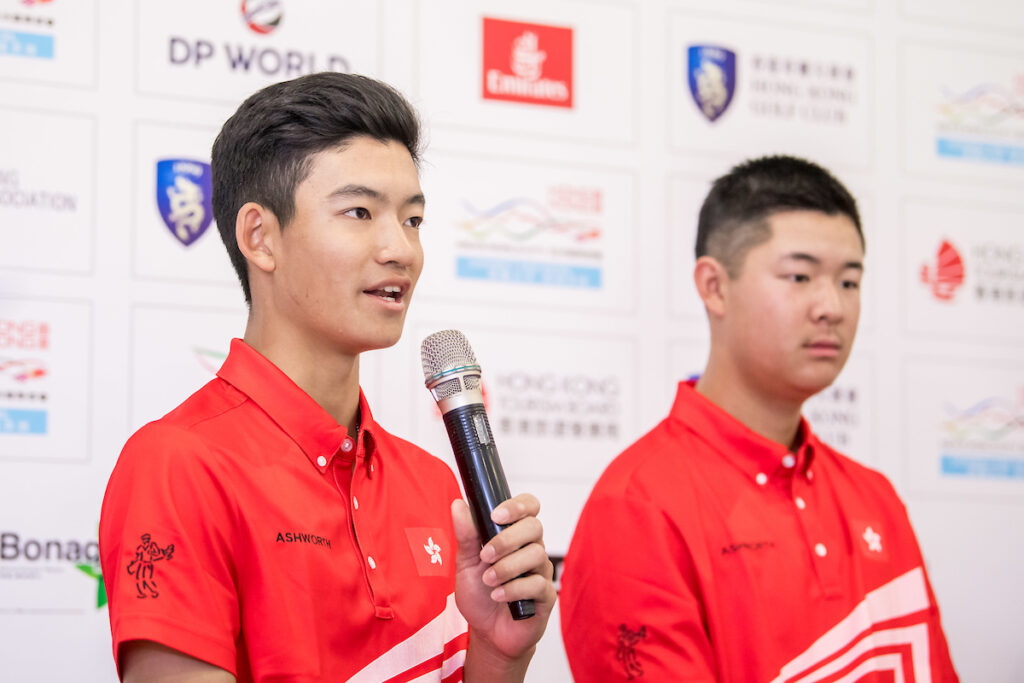 Ben Wong returns to Hong Kong from his studies at SMU, Texas and plays for the second time:

“I’ve been involved with the HKGA for as long as I can remember. The HKGA has really grown over the years. I started with them when I was six or seven years old and we’d go and hit balls from the driving range, but seeing the juniors out here today, they get to play here at Hong Kong Golf Club in squad games almost every day.

“The kids are getting more opportunity and tournament experience as well going overseas to the States and Europe, seeing the world and expanding their horizons. The HKGA is doing a great job there and having the resources and coaches like Gary [Gilchrist] is the reason the game is growing.”

Born in the S.A.R. Alexander Yang was brought up in California where he is currently at high school. At 17-years-old, he joined the HKGA’s elite player programme in 2018 but is clearly relishing the opportunities it brings:

“This is my first global professional event. I’m really excited because all the players play at a very high level but at the same time, I’ve been preparing for a long time to play at a high level as well so I think I can go out and do well.”

Providing an insight into his mindset going into the biggest tournament of his life, Yang added: “Going into every tournament, you have to have the mindset and desire to win – that’s what we all came here to do. You can’t ever set the bar too high. You got to shoot high and if you’re [just] trying to make the cut, it seems too low.”

“The most important thing for these players is confidence. Because confidence brings you results, and results build your self-image. Some of these young men have no idea how far they can go but the fantastic thing about golf is that two or three years from now, we could be watching them compete for the biggest tournaments in the world of golf.”

Meanwhile, Thailand’s Jazz Janewattananond believes he has returned to the Hong Kong Open as a better player ever since he made his debut at the storied event as an 18-year-old.

The 24-year-old has not enjoyed much success at Hong Kong’s oldest professional sporting event but six years after he first teed off at the Hong Kong Golf Club in 2014, the world number 40 is back as the third highest ranked player after American Tony Finau (16) and Ireland’s Shane Lowry (19).

The Asian Tour Order of Merit champion Jazz enjoyed a season like no other in 2019 when he swept aside all his rivals with four victories along with capturing the coveted Order of Merit trophy. 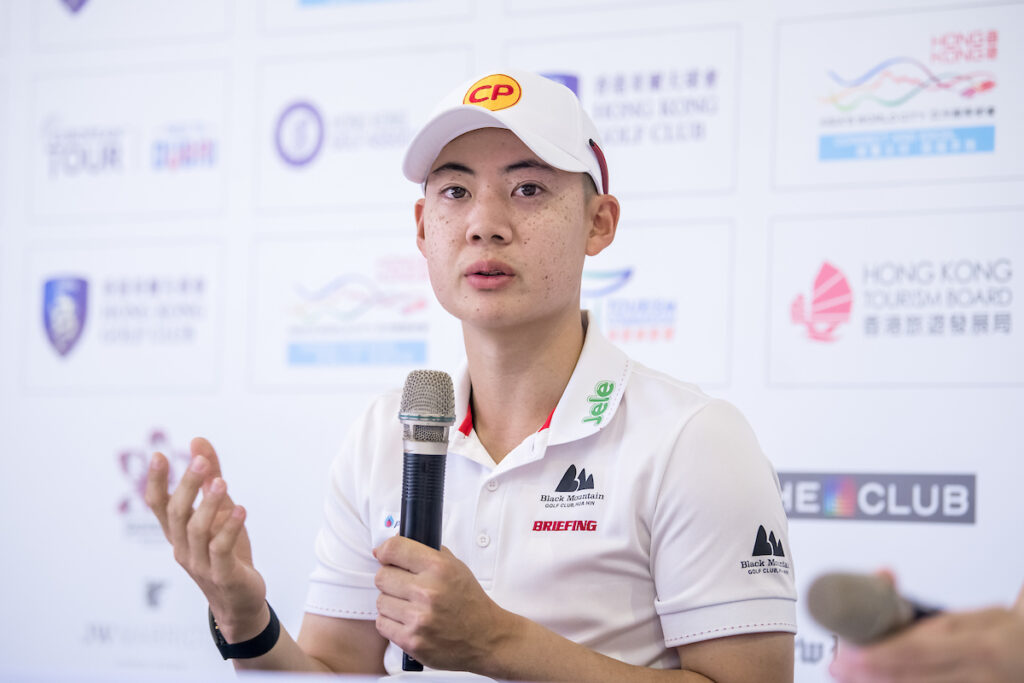 Australia’s Scott Hend is looking forward to lifting the Hong Kong Open trophy for the second time after he first joined the pantheons of greats when he claimed the prestigious title after pipping Philippines’ Angelo Que in the play-off in 2014.

The Australian is also eager to play his part in helping animals affected by the bushfire crisis back home with monetary contributions from every birdie and eagle he makes this week.

Hosted by Hong Kong Golf Club, the Hong Kong Open is sanctioned by the Asian Tour and Hong Kong Golf Association and organised by the European Tour. The tournament sees 120 players, representing 23 countries, compete for their share of the tournament’s US$ 1 million prize purse.